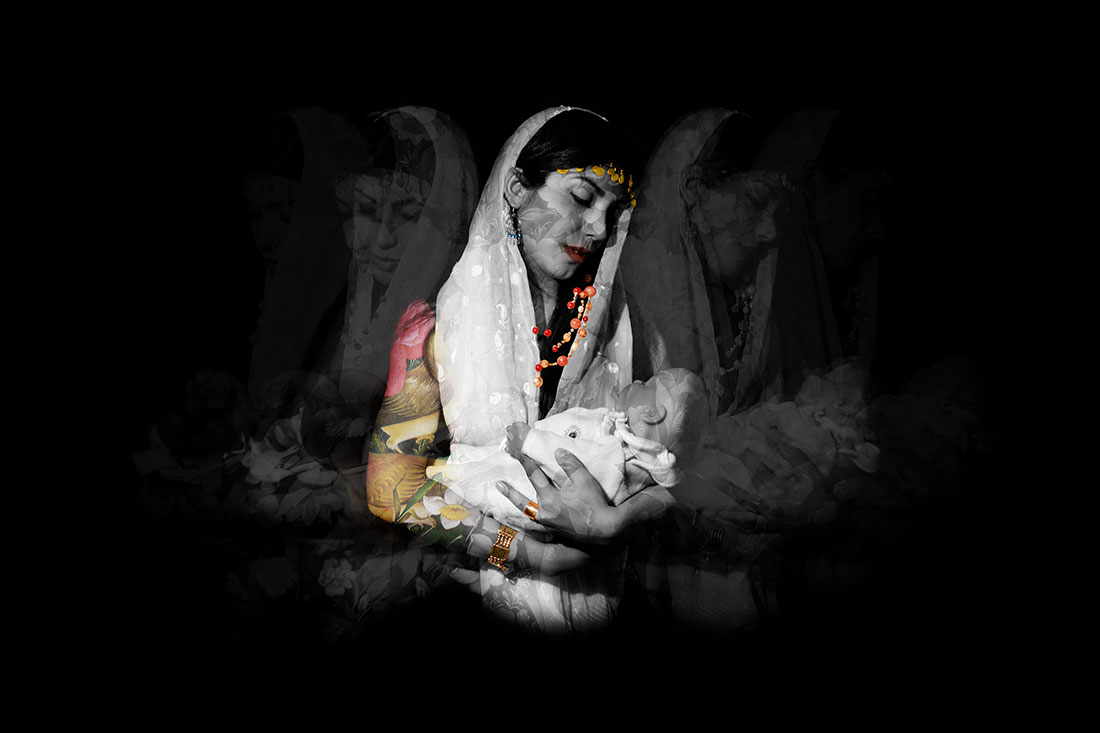 Sima Bina was born in Khorasan, in northeastern Iran, an ancient cultural crossroads where Afghan, Persian, Turkish and Kurdish customs and music have co-existed for centuries. In the heart of this multi-faceted folk tradition, Sima Bina started her career on Iranian radio at the age of nine, under the direction of her father, Ahmad Bina – a master of Iranian classical music and poet. After graduating from Tehran University in 1969, Sima Bina continued and perfected her knowledge of classical Persian radif, under renowned master teacher Davami.

Since 1979, alongside her classical studies, Sima Bina has focused on extensive research on Persian folk songs, collecting, recording, writing and re-interpreting popular regional music. By traveling to remote places throughout Khorasan, Sima has been able to gather and revive a collection of almost forgotten songs and melodies. Rejecting the notion that a professional vocalist must leave popular music to folk singers, while devoting their career to ‘serious’ music, she has gained a unique position in the history of Persian music.

Since 1993, Sima Bina has been invited to present her folkloric repertoire in festivals all over the world.

A lifetime of dedicated work on Persian folk music has made Sima Bina a legendary characterin the history of Iranian music.
Her singing careerbegins at the age of 10 with a popular radio program for children. Her musicaltalent drives her into taking music more seriously. She studied and perfectedPersian classical music with some of the great masters, and when she attainedthe artistic maturity to decide on her musical path, she chose to devote herlife to reviving the folk music of her homeland.
The fascination for Iranian folk music and songs had been ignited by her father, her first music teacherand songwriter. But, ironically its development into a lifetime commitment coincidedwith a historical time when her musical activities were banned in her homeland. Sima, however, maintains that it was ablessing in disguise. She says, “Whenyou can’t perform, people are taken away from you. So your focus shifts moreseriously to what you search for in life.”
In more than thirtyyears, by traveling to some of the most remote places all over Iran, Sima Bina collectedan assortment of almost forgotten folk songs and melodies. By recomposing the folksongsand tunes for her performance, Sima has formed her own distinctive style in Iranianfolk music.

In more than thirty years of research during which I have been collecting Persian folksongs, I have often come across a variety of ethnic tunes of lullabies. I even arranged and recorded some of the more elaborated ones along with my folksongs.
I soon realized that these plain rhythmic lyrics of mothers’ songs were themselves a unique and invaluable cultural treasure that if not preserved, would be lost to future children. What I came to appreciate most was the abundance and variety of Persian lullabies. Therefore, I vigorously started to devote a portion of my research time to recording and restoring the lullabies across the vast plateau of Iran. In my initial steps I found that this treasure would have to be dug out from under layers and layers of time and that I often would have to sit in the presence of old grandmothers, hoping they would recollect these almost forgotten tunes.

Since 1993 Sima Binahas accepted invitations to perform her music worldwide in prestigiousfestivals and organized concerts. The worldwide recognition her music receivestoday is the materialization of over forty years of her devotion to Iranianfolk music.
While pursuing Iranian folk songs, Sima often came across a variety of ethnic lullabies whichshe added to her collected works. This collection finally led to her book, IranianLullabies in 2009. In this book, SimaBina not only shares her findings, her perception, the scores and visualexpression of the selected lullabies with mothers, she also presents fortyoriginal Iranian lullabies in four CDs in which her vocal is sometimes blended withthe singing of the mothers who had song the lullabies to her in different partsof Iran.
Sima continues topresent Iranian folksongs in World Music festivals and concerts, while furtherexploring hidden folksongs in the vast plateau of Iran. She is currently working on Balouch music andmaintains documenting her findings of Iranian folksongs and music.
Sima Bina’s Official Website
Share this